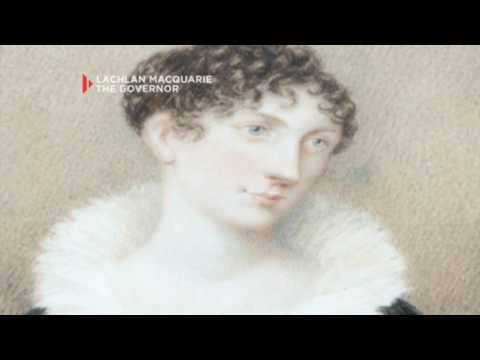 Lachlan Macquarie was a member of the British Army. When Governor William Bligh was overthrown in 1808, the regiment Macquarie commanded was ordered to NSW to replace the rebellious New South Wales Corps. When the chosen successor to Bligh fell ill, Lieutenant-General Lachlan Macquarie applied for the position of governor. His application was successful, and he assumed office in Sydney on 1 January 1810.

On his arrival in the colony, Macquarie found many of Sydney’s public buildings dilapidated and decaying. Within months he had ordered a new army barracks to be built, followed by a hospital. This was the beginning of a vigorous, far-sighted public works program which would give the colony 265 new buildings as well as a network of roads and bridges. Macquarie believed that fine new buildings and properly laid-out streets would not only adorn the colony but also promote social order and morality.

In carrying out his building program, Macquarie appointed the convict Francis Greenway as civil architect and assistant engineer. Greenway arrived in Sydney in 1814, having been sentenced to 14 years’ transportation for forgery. A trained architect, he was permitted to set up his own practice. In 1815 he received a ticket-of-leave and began to advise Macquarie on his public works.

Greenway went on to design some of Australia’s finest colonial buildings. In 1817 he was granted a conditional pardon, which was made absolute two years later. Macquarie’s public works were a visible sign of the colony’s progress and growing prosperity, with Greenway’s buildings bringing sophistication and quality to Sydney. However, due to its expense and magnitude, this program of building attracted the opposition and censure of the British government. London’s aim was to build a penal settlement with plain, functional and inexpensive structures befitting a penal settlement that was to be managed as a deterrent. This goal was at odds with the elegant new town envisioned by Macquarie.

Additionally, wealthy settlers publicly voiced their displeasure of the program as many wanted convict labour available for their properties rather than public works.

The Government House stables was a grand, castellated building in the Gothic style. It was commissioned by Macquarie to harmonise with a proposed new government house that was never built. Begun in 1817, the stables were condemned by Macquarie’s enemies as too costly and self-indulgent. Commissioner Bigge, who had been selected by Lord Bathurst of the Colonial Office to investigate the colony’s effectiveness, described it as a building of ‘useless magnificence’. Bigge had arrived in Sydney in 1819 and spent 18 months gathering evidence in the colony. On his return to England, Bigge wrote three hefty reports which were highly critical of Macquarie’s administration, including the extravagance of his building program.

In early 1820 Macquarie, who had been seriously ill, tendered his resignation. His return to England was marred by the publication of Bigge’s reports.

Macquarie believed, guided by principles of humanity and justice, that convicts who had completed their sentence should be given the opportunity to prosper in New South Wales and achieve respectability. He believed that in time New South Wales would move beyond its convict origins to become one of Britain’s most flourishing colonies.

Students analyse visual sources to assess the significance of the impact made by Francis Greenway and Governor Macquarie on the development of the colony of Sydney in the early nineteenth century.

Francis Greenway (1777- 1837) produced some of the finest colonial buildings in Australia.

Many used their art to record and interpret the landscape and people of the early settlement.