What's in the collection

The Library holds a rich and significant collection of personal diaries and letters written by those who served in the First World War.  The collections also include  photographs, maps, artwork and all kinds of printed material that document the events and experinces of those who were involved in the War, both overseas and at home. 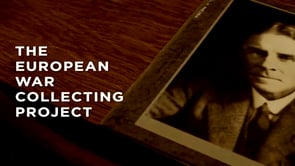 How the collection was formed

Soon after the Armistice was declared in November 1918, Principal Librarian William Ifould and the Trustees of the Library established the European War Collecting Project (also known as the Soldiers' Diaries Collection or War Diaries Collection). Advertisements were placed in newspapers around Australia, New Zealand and in the United Kingdom for servicemen and their families to deposit material with the Library. Ifould was particularly interested in purchasing descriptive collections which expressed the personal feelings of the men, their experiences in battle and their observations of the conflict.

The Library sought out high quality, detailed and descriptive accounts from all theatres of war where Australians had served. Accounts were sought from soldiers, sailors, airmen and nurses of all ranks. Each diary collection was appraised and suitable collections purchased. Purchase prices varied from ₤5 to ₤75.

Throughout 1919 and into the 1920s material such as diaries, letters, photographs, maps, artwork and printed material were acquired by the Library.

In March 2015 the diaries and letters acquired via the European War Collecting Project were added to the UNESCO Memory of the World register.

The Library has continued to receive personal diary and letter collections  and now holds over 550 collections. The Library continues to make this collection available via its websites and research guide.

You can find more information on the European War Collecting Project in our catalogue.

The Library began collecting the personal diaries and correspondence of men and women who served in the First World War soon after the Armistice was declared in November 1918.

Our collection contains many stories – the personal accounts found in diaries, maps that document the progress of the war, newspapers and ephemera that reflect what was happening on the home front, life captured through the photographer’s lens.

Our diary and letter collections offer a rich and personal insight into those who served in the Great War.