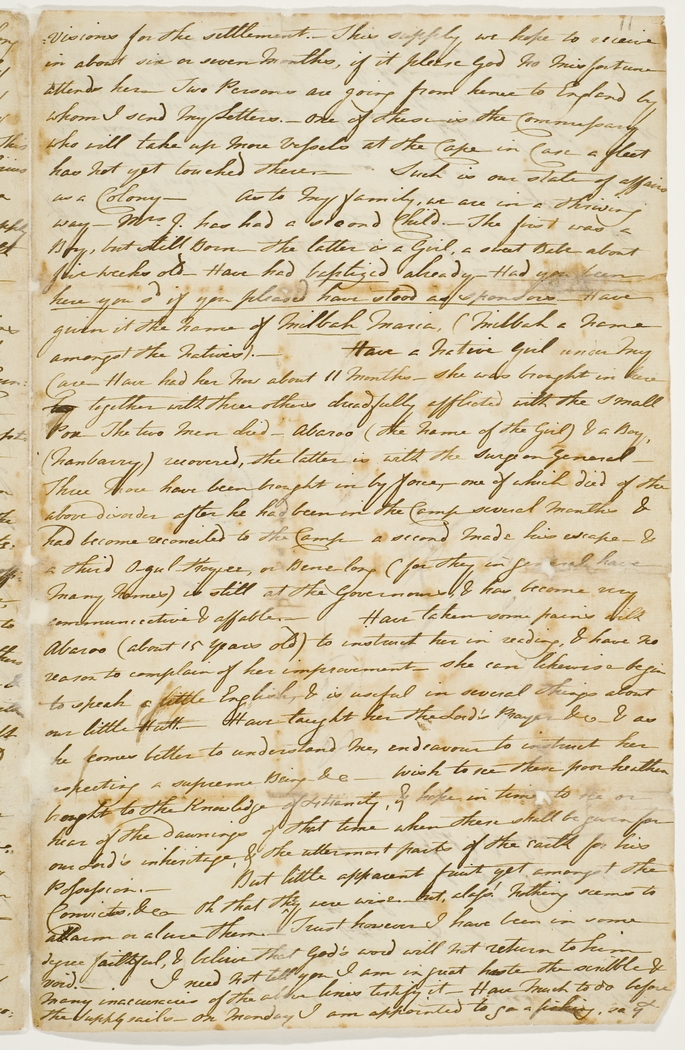 [pro]visions for the settlement. - This supply we hope to receive in about six or seven Months, if it please God no misfortune attends her. - Two Persons are going from hence to England by whom I shall send my Letters. - One of these is the Commissary who will take up more Vessels at the Cape in Case a fleet has not yet touched there. - Such is our state of affairs as a Colony. - As to my family, we are in a thriving way - Mrs. J. has had a second Child. - The first was a Boy, but still Born. - The latter is a Girl, a sweet Babe about five weeks old - Have had baptized already - Had you been here you sd. if you pleased have stood as sponsors. - Have given it the name of Milbah Maria, {Milbah a name amongst the Natives}. - Have a Native Girl under my Care - Have had her now about 11 Months - She was brought in here with three others dreadfully afflicted with the Small Pox. The two men died - Abaroo { the name of the Girl} & a Boy, {Nanbarry} recovered, the latter is with the Surgeon General. - Three more have been brought in by force, one of which died of the above disorder after he had been in the Camp several Months & had become reconciled to the Camp - a second made his escape - & a third O-gul-[..?], or Benelong {for they in general have many names} is still at the Governors & has become very communicative & affable. - Have taken some pains with Abaroo {about 15 Years old} to instruct her in reading, & have no reason to complain of her improvement - she can likewise begin to speak a little English, & is useful in several things about our little Hutt. -
Have taught her the Lord's Prayer &c - & as she comes better to understand me, endeavour to instruct her respecting a supreme Being &c. - Wish to see these poor heathen brought to the Knowlege of X'tianity, & hope in time to see or hear of the dawnings of that time when these shall be given for our Lord's inheritage, & the uttermost parts of the earth for his Possession.- But little apparent fruit yet amongst the Convicts, &c - Oh that they were wise - but, alass! Nothing seems to alarm or [..?] them. - Trust I have been in some degree faithful, & believe that God's word will not return to him void. - I need not tell you I am in great haste - the scribble & the inaccuracies of the above lines testify it - Have much to do before the Supply sails - On Monday I am appointed to go a fishing, so therefore