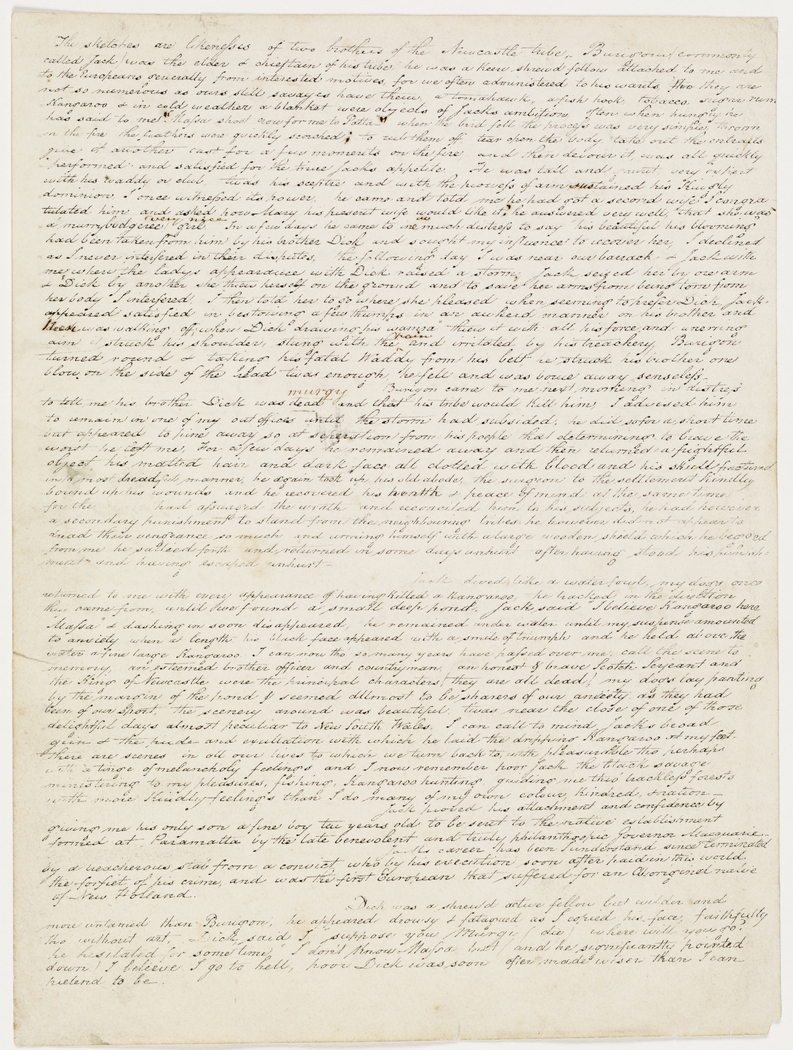 Manuscripts and artworks from an album assembled by Major James Wallis

1 leaf manuscript about Burigon Jack and his brother Dick

The sketches are likenesses of two brothers of the Newcastle tribe. Burigon commonly called Jack was the elder and chieftain of his tribe, he was a keen shrewd fellow attached to me and to the Europeans generally from interested motives, for we often administered to his wants, tho they are not as numerous as ours still savages have them, a tomahawk, a fish hook, tobacco, sugar, rum, Kangaroo and in cold weather a blanket were objects of Jacks ambition often when hungry he has said to me “Massa shoot now for me to Patta” when the bird fell the process was very simple thrown on the fire the feathers were quickly scorched; to rub them off, tear open the body take out the entrails, give it another cast for a few moments on the fire, and then devour it, was all quickly performed and satisfied for the time Jacks appetite. He was tall and gaunt, very expert with his waddy or club t’was his sceptre and with the prowess of arm sustained his Kingly dominion. I once witnessed his power he came and told me he had got a second wife I congratulated him and asked how Mary his present wife would like it, he answered very well, that she was a murrybudgeree girl( very nice). In a few days he came to me in much distress to say his beautiful, his blooming had been taken from him by his brother Dick and sought my influence to recover her. I declined as I never interfered in their disputes. The following day I was near our barrack and Jack with me where the ladys appearance with Dick raised a storm.
Jack seized her by one arm and Dick by another, she threw herself on the ground and to save her arms from being torn from her body I interfered. I then told her to go where she pleased when seeming to prefer Dick, Jack appeared satisfied in bestowing a few thumps in an awkward manner on his brother and then was walking off when Dick “drawing his wanna” threw it with all his force and unnerving aim it struck his shoulder stung with the pain and irritated by his treachery Burigon turned round and taking his fatal Waddy from his belt he struck his brother one blow on the side of the head was enough he fell and was borne away senseless.
Burigon came to me next morning in distress to tell me his brother Dick was dead (murgy) and that his tribe would kill him. I advised him to remain in one of my offices until the storm had subsided, he did so far a short time but appeared to pine away so at separation from his people that determining to brave the worst he left me . For a few days he remained away and then returned a frightful object, his matted hair and dark face all clotted with blood and his skull fractured in a most dreadful manner he again took up his old abode. The surgeon to the settlement kindly bound up his wounds and he recovered his health and peace of mind at the same time for the [indecipherable](blank) had assuaged the wrath and reconciled him to his subjects he had however a secondary punishment to stand from the neighbouring tribes he however did not appear to dread their vengeance so much and arming himself with a large wooden shield which he begged from me he sallied forth and returned in some days unhurt after having stood his punishment and having escaped unhurt.
Jack dived like a waterfowl, my dogs once returned to me with every appearance of having killed a kangaroo, he tracked in the direction they came from, until we found a small deep pond. Jack said “I believe kangaroo here “Massa” & dashing in soon disappeared, he remained under water until my suspense amounted to anxiety when at length his black face appeared with a smile of triumph and he held above the water a fine large kangaroo. I can now tho’ so many years have passed over me, call the scene to memory, an esteemed brother officer and countryman, an honest & brave Scotch Serjeant and the Kings of Newcastle were the principal characters,/they are all dead,/ my dogs lay panting by the margin of the pond & seemed allmost to be sharers of our anxiety as they had been of our sport, the scenery around was beautiful t’was near the close of one of those delightful days almost peculiar to New South Wales. I can call to mind Jacks broad grin & the pride and exullation with which he laid the dripping kangaroo at my feet. These are scenes in all our lives to which we turn back to with pleasurable tho perhaps with a tinge of melancholy feelings and I now remember poor Jack the black savage ministering to my pleasures, fishing, kangaroo hunting, guiding me thro’ trackless forests with more kindly feelings than I do many of my own colour, kindred, nation –
Jack proved his attachment and confidence by giving me his only son a fine boy ten years old to be sent to the native establishment formed at Paramatta by the late benevolent and truly philanthropic Governor Macquarie.
Jacks career has been I understand since terminated by a treacherous stab from a convict who by his execution soon after paid in this world the forfiet of his crime, and was the first European that suffered for an Aboriginal native of New Holland.
Dick was a shrewd active fellow but wilder and more untamed than Burigon, he appeared drowsy & fatigued as I copied his face, faithfully tho without art, Dick said I “suppose you Murgi /die/ where will you go? he hesitated for some time “ I don’t know Massa but / and he significantly pointed down / I believe I go to hell, poor Dick was soon after made wiser than I can pretend to be.