Fergus Hume’s The Mystery of a Hansom Cab is the story of an illegitimate child, a fear of family scandal and a homicide. Promoted as a startling and realistic story of Melbourne social life, the novel exemplifies the idea of a sensational mystery: a man murdered in a cab with no witnesses and no immediate motive. It offers a thrilling detective story as well as commentary on various aspects of Australia during the late 1800s.

Its author was born Fergusson Wright Hume in England on 8 July 1859. Migrating with his family to New Zealand as a young child, he was educated in Dunedin on the South Island. Hume went on to study law and, shortly after being admitted to the Bar, he migrated again — this time to Melbourne, Australia. Taking up a position with a local solicitor, Hume used one of the world’s great cities to set about establishing his literary career. The Mystery of a Hansom Cab, his first book, gave that career an incredible start.

Among the fascinating aspects of this pioneering crime novel is Hume’s engagement with ideas of punishment. In a chapter titled The Hands of Justice, Dr Chinston predicts that the man responsible for the murder will commit suicide. The prisoner politely obliges, on the very next page, when he 'hang[s] himself in his cell during the night'. Despite having trained for the legal profession, Hume preferred, in this instance at least, a far neater and quicker ending than a trial and subsequent sentencing could provide.

'I tried to get it published,' Hume complained after completing the novel, 'but everyone to whom I offered it refused even to look at the manuscript on the ground that no Colonial could write anything worth reading.' A determined and entrepreneurial Hume would set about the task of self-publishing and, in 1886, the printers Kemp and Boyce produced 5000 copies (with Hume claiming that all copies were sold within three weeks). 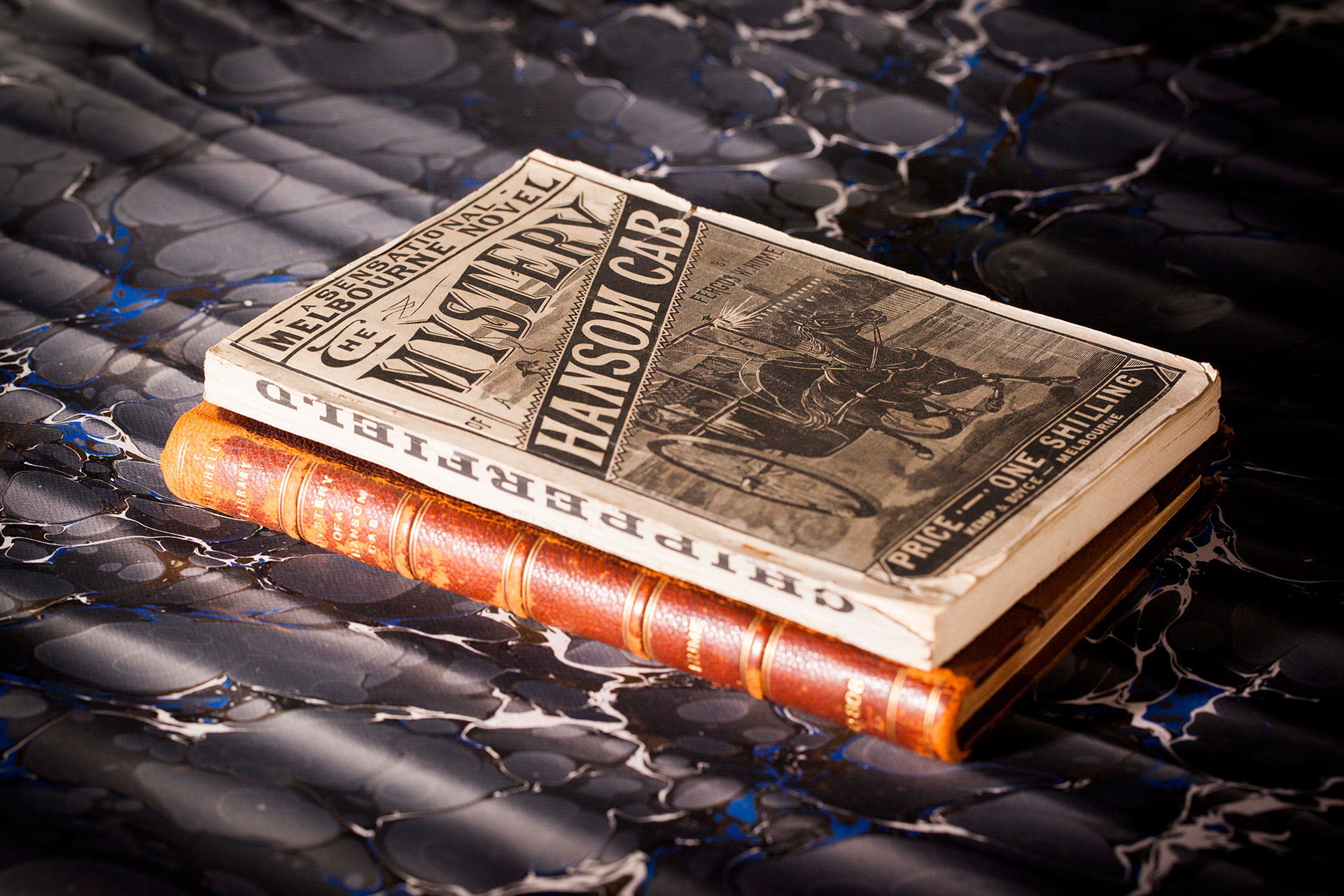 Nearly half a century later a short article on ‘Rare Australian Books’ that appeared in the Sydney Morning Herald on 30 December 1935 reported that:

There is, in the Mitchell Library, a copy in good condition, of the original Melbourne edition. It has both covers intact, and two pages of advertisements at the end of the book. The title-page bears the imprint, ‘Melbourne, Kemp and Boyce, printers'.

Today, the Library holds two copies of the first edition. Of four known to have survived, these are the only complete copies.

The book’s immediate and stunning success generated a vast array of editions. By some estimates 25,000 copies were sold in the first major Australian print runs alone. Having so many versions in print prompted one auction house to note that the bibliography of the book is confused and imperfect. Contributing to this confusion is the work of Frederick Trischler who, managing The Hansom Cab Publishing Company, went on to sell over 500,000 copies of the book. This made The Mystery of a Hansom Cab the biggest-selling detective novel of the nineteenth century. Hume did not profit financially from such unprecedented sales figures, having sold the rights to the book for £50. Yet this novel changed the landscape of popular fiction, and readers (as well as authors) from around the world benefited from his efforts.

The book helped define the new publishing genre of detective fiction, alerting publishers to a new, and huge popular market — although the real beneficiary, it might be argued, was not Hume but Conan Doyle, whose first Sherlock Holmes story, A Study in Scarlet, was not published until after The Mystery of a Hansom Cab.

Hume proved himself to be a prolific author, producing almost 140 novels and short story collections. Though Hume’s efforts contributed to the growing genre of crime fiction, he was never able to replicate his initial triumph. His other novels set in Australia, Madam Midas (1888) and Miss Mephistopheles (1890), could not command the attention of the vast readership that was so ready to purchase The Mystery of a Hansom Cab and devour the story of murder in 'Marvellous Melbourne'. Fergus Hume died in England on 12 July 1932, just a few days after his 73rd birthday.

Many still enjoy Hume’s international bestseller, but the majority of his works have been forgotten. The Fergus Hume Society formed recently to promote engagement with the author’s life and work for enjoyment, scholarship and research. Lucy Sussex, author of Blockbuster!: Fergus Hume and The Mystery of a Hansom Cab, delivered the society’s inaugural lecture at the Library in July 2015.

Dr Rachel Franks is Coordinator, Education & Scholarship, at the Library and a Conjoint Fellow at the University of Newcastle.

‘Heaven could be no more magical and mystical than unspoiled Australia' - the brilliant career of Miles Franklin.

In the current era of instant digital communication, letters between long-distance lovers have a particular poignancy.