Allan McCulloch, the wiry curator of vertebrates at the Australian Museum, attempted several times in 1915 to enlist in the Australian Imperial Force. At five-foot six, he just scraped over the minimum height criterion, but he failed to expand his chest to the required 34 inches. It would have appealed to his sense of irony that he had been fit enough to withstand rigorous scientific expeditions to remote Australia.

Like many volunteers, McCulloch saw a chance to exchange a settled middle-class life for masculine adventure. Frustrated, he watched as his younger friends and colleagues left one by one for training camps and the front.

Australia began compulsory military service in 1909 but, under an earlier Defence Act, conscripted men could not be sent overseas to fight. Prime Minister Billy Hughes wanted to change that. Passionately committed to Britain and the Great War, he pledged many more troops than voluntary enlistment alone could provide.

But Hughes had also pledged, to his own Labor Party at least, not to introduce conscription. With a Senate majority, the party would not have allowed it anyway. So, in August 1916, Hughes announced a referendum to be held on 28 October of that year. The announcement sparked a dramatic public debate, which historian Joan Beaumont says ‘has never been rivalled in Australian political history for its bitterness, divisiveness and violence’.

More than an ideological shouting match, the debate featured censorship, thuggery, propaganda, mass rallies and union strikes. Beaumont’s history of the war, Broken Nation (2013), traces not just the battles overseas but those on the home front:

What was at stake . . . was not simply a disagreement about the military need for conscription but an irreconcilable conflict of views about core values . . . Set against the backdrop of the Somme, the debate became infused with the passion and hysteria of mass grief.

The government had the upper hand, ruthlessly using the machinery of state under the War Precautions Act 1914 to censor debate, seize opposing propaganda and repress opposition.

The pugnacious Hughes pulled all available levers ahead of the vote, including a requirement for all single men aged between 18 and 42 to present themselves for military training. Even those rejected for service overseas — like McCulloch — were compelled to report for duty in 1916.

Of 600,000 eligible men, less than 30 per cent complied. Of those who did, many then sought exemption. The government convened tribunals to hear the avalanche of applications. One week out from the referendum, Special Magistrate Mr MH Fitzhardinge heard from McCulloch and 60 others in a marathon one-day sitting in Parramatta Police Court.

The local Cumberland Argus and Fruitgrowers Advocate reported on each applicant under the headline ‘The Men Who Want Exemption’. The story interspersed photographs and profiles of local lads serving or missing overseas.

Denied representation, the applicants offered emotional rather than legal arguments in support of their claims. Typical was Charles John Cook, engine-driver, 31 years, one of five sons and the only one still at home. One brother had left for the front; another was in a military training camp; the others still at school. Application refused.

Joseph Grogin, labourer, 34, the second son in a family of four boys (one of whom had already been killed in action) and two girls, was sole supporter of his aged parents. Application refused.

Harold Sandeman, the only applicant that day to seek exemption on conscientious grounds, was also refused, though Fitzhardinge noted his reasons.

McCulloch produced a statutory declaration that he was an only son (a valid reason for exemption) and sole carer for his mother, Ella Maud (nee Backhouse), who lay bedridden with spinal paralysis in their Parramatta home. He became one of just 12 to receive their exemption certificates that day.

He found little peace of mind from this result. Both the ‘yes’ and ‘no’ cases recognised the political power of women. One of the more successful appeals came from the anti-conscriptionists with their famous poem, ‘The Blood Vote’:

‘Why is your face so white, Mother?
Why do you choke for breath?’
‘O I have dreamed in the night my son,
That I doomed a man to death.’

‘The Blood Vote’ was signed ‘WR Winspear’, a prominent socialist, but had been penned by another man, journalist EJ Dempsey, who worked for the pro-conscription Evening News. Dempsey arranged for Winspear to sign it in order to save his own job, according to Verity Burgmann’s entry on Winspear in the Australian Dictionary of Biography. The successful appeal to maternal approval was soon co-opted and parodied by the ‘yes’ camp:

‘Why is your face so white, brother?
‘Why are your feet so cold?
Are you afraid to fight, brother?
To guard that mother old?’

And so those men who stayed were depicted as shirkers tied to their mother’s apron strings — more dark irony for McCulloch.

Despite the card-playing, lever-pulling and dirty tricks, the referendum was narrowly defeated. It didn’t stop the propaganda machine, however, and the government stepped up its enlistment drive. 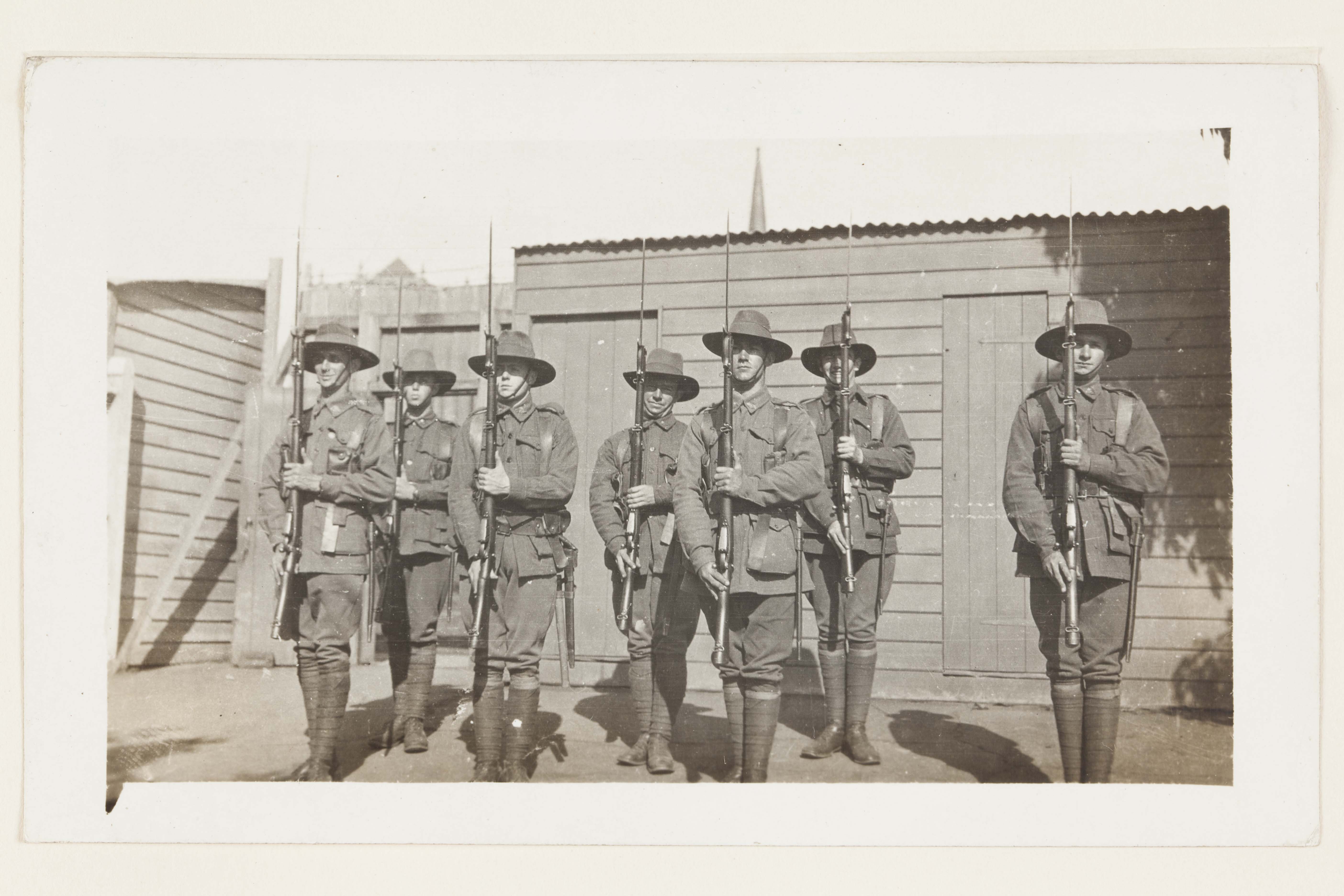 McCulloch may have won exemption from military service but, like many who stayed, he suffered daily humiliation from the media and a self-righteous public. Newsreels in cinemas showed battleships loaded with cheering soldiers leaving port, or scenes of French cafes and mateship in the trenches. Everywhere posters pushed guilt buttons; if the appeal to Empire didn’t get you, the slight on your manhood would.

Those, like McCulloch, who’d been rejected for voluntary service formed the Rejected Volunteers’ Association, which issued special badges marking them as non-shirkers. They needed protection from the white feathers said to be handed out by women to anyone in civvie trousers.

Joan Beaumont shows how the first referendum shattered the fragile consensus politics of the optimistic young nation along its ‘underlying fault lines of class, religion and gender’.

The closely divided vote also shattered the Australian Labor Party, forcing Hughes and his supporters out. They formed an alliance with the pro-conscription Liberals and won the May 1917 election — not because people now supported conscription, but because they supported the war itself.

Lacking another suitable candidate, the new Nationalist Party installed Hughes as Prime Minister. Faced with further declines in voluntary enlistment, Hughes opted for another referendum on conscription in December 1917, despite his new parliamentary majority. Again both sides trotted out their campaigns. And again, the appeal to maternal loyalty featured strongly.

When the vote came around on 20 December, Australia again voted against conscription, with the ‘no’ vote increasing slightly in most states.

Ella McCulloch didn’t live to see the result. She died in October 1917, and Allan became distraught with grief. ‘Believe me, old man, if you can’, he wrote to his friend Ellis Troughton, now a private with the Army Medical Corps, stationed in the UK — ‘that it’s easier to leave our very dearly loved ones in health even though it be only fairly good in its way, than to watch them slowly sinking through sheer suffering under one’s eyes’.

Compounding his grief, he had to break up the family home in order to share the estate with his three sisters. With nowhere else to go and, he wrote, nothing more to lose, he decided to ‘face the doctors once more’.

When McCulloch again fronted up in September 1918 he finally made 34 inches and could finally enlist, giving his home address as ‘Australian Museum, Sydney’. During his two months in the Liverpool training camp, he wrote happily to friends about his new life of drills and latrine-cleaning. He even documented camp life in a series of photographs now held by the Mitchell Library.

But his short-lived happiness ended with the Armistice in November. Demobbed without seeing action, it was back to his old job at the museum, writing to friends, ‘I’ve come a gutser’.

At least he’d proved his manhood, honoured his mother and done his duty. He was soon immersed in his work compiling a checklist of Australian fish and sharing his vast knowledge of natural history with museum visitors. On Anzac Day 1919, a friend and artist Tom Ferry sketched his portrait that showed him healthy, proud and confident.

It would not always be that way.

Brendan Atkins is a freelance writer and editor.

He is writing a biography of Allan McCulloch and welcomes any new information (boy.chutney@gmail.com). 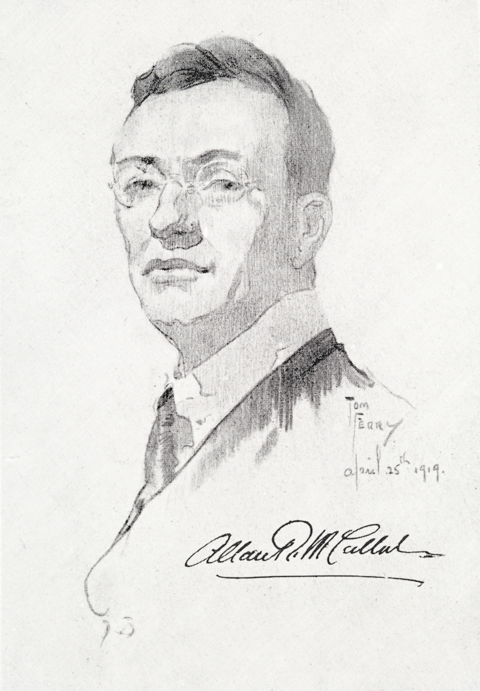 The Library is delighted to announce the complete digitisation of its renowned "pattern" set of 681 folio-sized plates for  'The Birds of Australia' by John Gould.