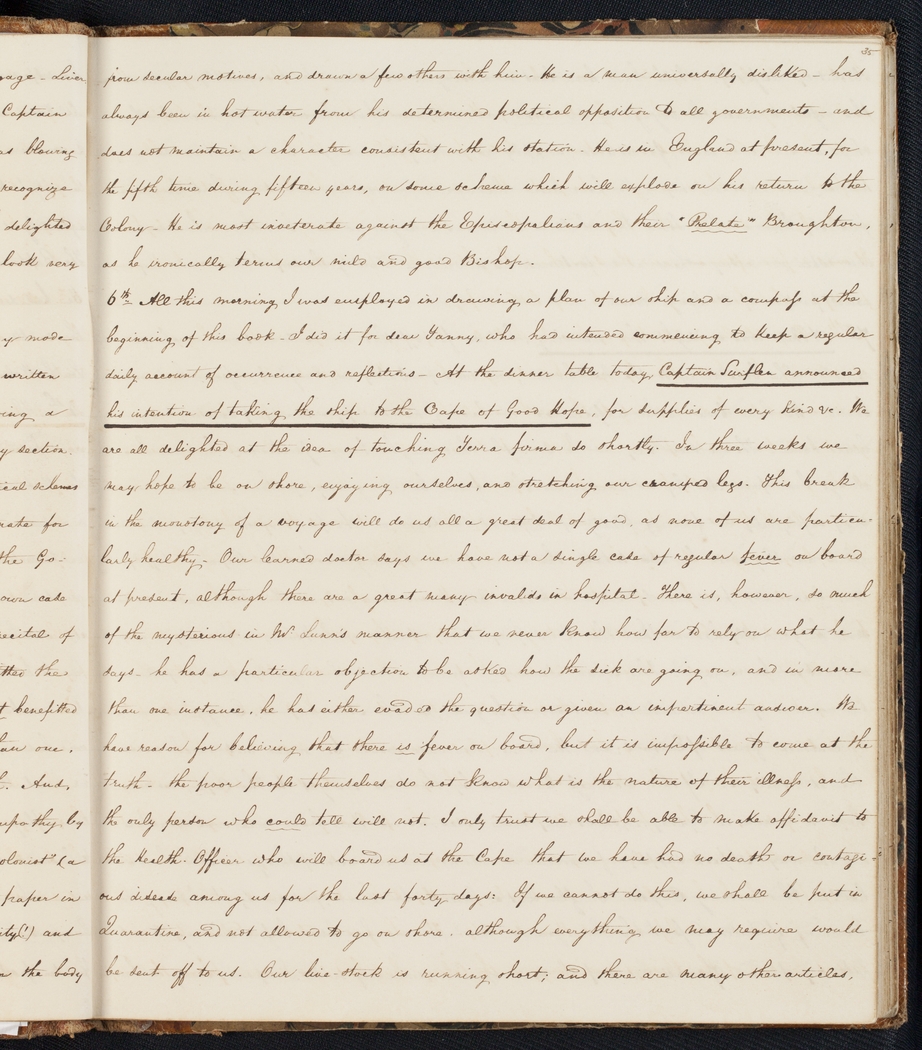 from secular motives, and drawn others with him. He is a man universally disliked - had always been in hot water from his determined political opposition to all governments - and does not maintain a character consistent with his station. He is in England at present, for the fifth time during fifteen years, on some scheme which will explode on his return to the Colony. He is most inveterate against the Episcopalians and their “Prelate” Broughton, as he ironically terms our mild and good Bishop.

6th. All this morning I was employed in drawing a plan of our ship and a compass at the beginning of this book - I did it for dear Fanny, who had intended commencing to keep a regular daily account of occurrences and reflections - At the dinner table today, Captain Surflen announced his intention of taking the ship to the Cape of Good Hope, for supplies of every kind, etc. We are all delighted at the idea of touching Terra Firma so shortly. In three weeks we may hope to be on shore, enjoying ourselves, and stretching our cramped legs. This break in the monotony of a voyage will do us all a great deal of good, as none of us are particularly healthy. Our learned doctor says we have not a single case of regular fever on board at present, although there are a great many invalids in hospital. There is, however, so much of the mysterious in Mr Lunn’s manner that we never know how far to rely on what he says. He has a particular objection to be asked how the sick are going on, and in more than one instance, he has either evaded the question or given an impertinent answer. We have reason for believing that there is fever on board, but it is impossible to come at the truth. The poor people themselves do not know what is the nature of their illness, and the only person who could tell will not. I only trust we shall be able to make affidavit to the Health Officer who will board us at the Cape that we have had no death or contagious disease among us for the last forty days: If we cannot do this, we shall be put in Quarantine, and not allowed to go on shore, although everything we may require would be sent off to us. Our live-stock is running short; and there are many other articles ...