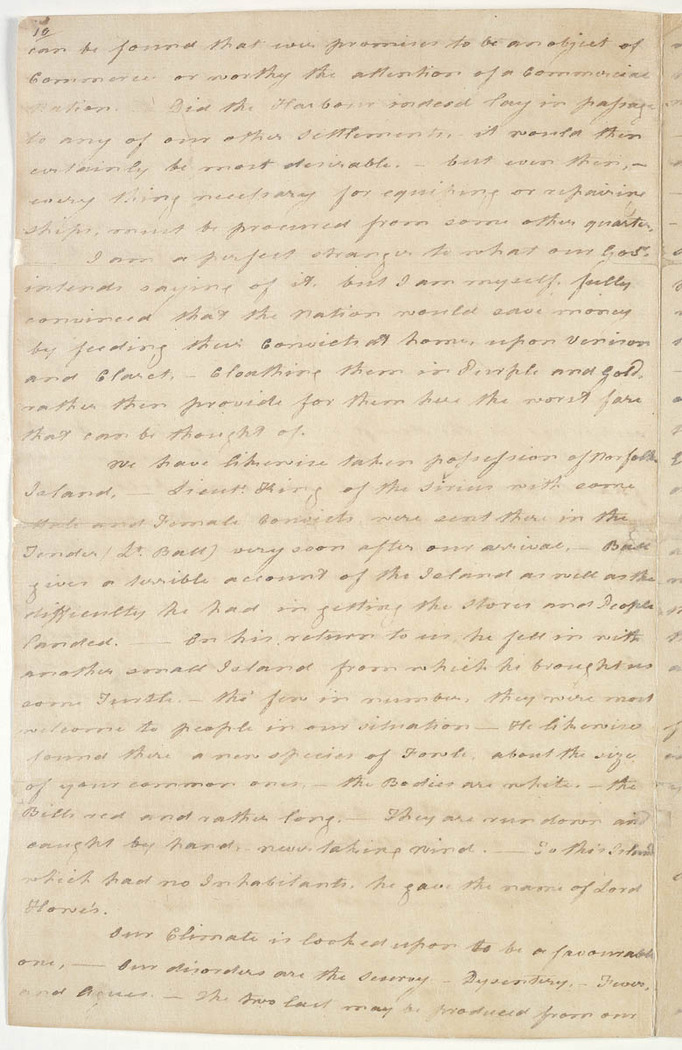 can we find. Some Convicts who had been sent a few days ago to hunt for the Governor’s lost cows, say that they discover’d a large River, but as they could perceive no stream in it, it is probable that it was only one of the Marshes which was overflow’d by the incessant rains we have had for some weeks. I should suppose the Governor to be of the same opinion, for I cannot understand that any steps have been taken to ascertain the truth of it.

All the Trees here, meriting the name of Timber, are confin’d to two kinds, - the first is a very large, promising and beautiful Tree, perfectly straight in its Trunk, with noble spreading Branches. Its leaves have a strong aromatick taste and smell, much resembling Pepper-mint. It is hard, heavy and red in grain, and when cut, a great quantity of a kind of astringent red Gum really underline runs underlineend from it in a stream, but the Physical Gentlemen say it is of no use, neither is the Tree, for when it is Sawed it is found good for no one purpose but the fire. When exposed to the air it falls to peices like a cut Onion.

The other Tree does not grow to any considerable size, tho’ very lofty, it is likewise very hard, and grows, not unlike our Pine, but in its grain it is much more of the Oak. This Tree if it could be found sound might be useful underline here underlineend in building, but not one in a thousand can we find but what is rotten at the heart, yet of those, with the assistance of the Cabbage Tree, of which we have not left one within a dozen of Miles of us, are we from necessity obliged to errect such Hutts as we are now making for ourselves. Our variety of Shrubs is great, and some of them most beautiful, from those, I intend collecting