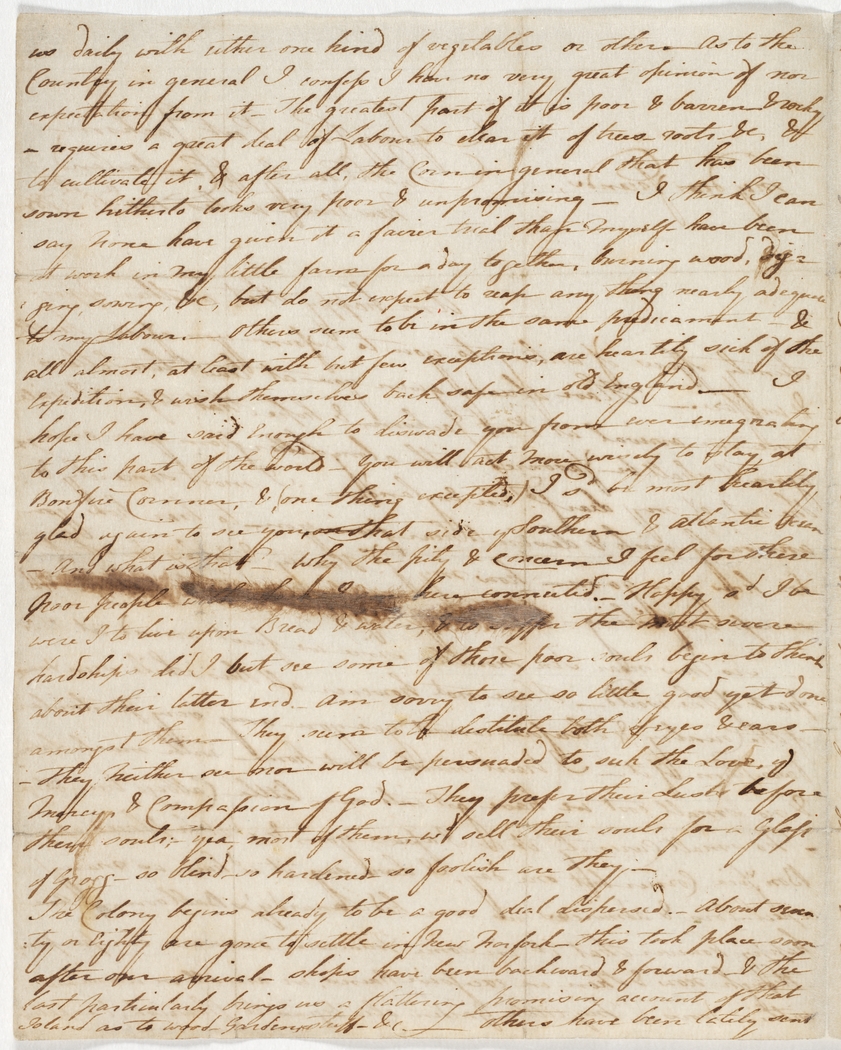 by Henry Fricker
Transcript:
us daily with either one kind of vegetable or other. As to the Country in general, I confess I have no very great opinion of nor expectation from it. The greatest part of it is poor & barren & rocky & requires a great deal of labour to clear it of trees, roots, &c, & to cultivate it, & after all, the corn that has been sown hitherto looks very poor & unpromising. I think I can say none have given it a fairer trial than myself. Have been at work in my little farm for a day together, burning wood, digging, sowing, &c, but do not expect to reap anything nearly adequate to my labour. Others seem to be in the same predicament & all almost, at least with but few exceptions, are heartily sick of the expedition, & wish themselves back safe in old England. I hope I have said enough to diswade you from ever emigrating to this part of the world. You will act more wisely to stay at Bonfire Corner & (one thing excepted) I shd be most heartily glad again to see you on that side of Southern & Atlantic Seas - and what without? Why the pity and concern I feel for these poor people with whom I am here connected. Happy would I be were I to live upon Bread & water and to suffer the most severe hardship, did I but see some of those poor souls begin to think about their latter end. Am sorry to see so little good yet done amongst them. They neither see nor will be persuaded to seek the Lord of Mercy and Compassion of God. They prefer their Lust before their Souls, yea, most of them will sell their souls for a Glass of Grogg, so blind, so foolish, so hardened are they. The Colony begins already to be a good deal dispersed. About seventy or eighty are gone to settle in New Norfolk. This took place soon after our arrival. Ships have been backward & forward, & the last particularly brings us a flattering promising account of that island as to wood, garden stuff, &c. Others have been lately sent
Call Number:
Safe 1 / 121
Published date:
1787-1797