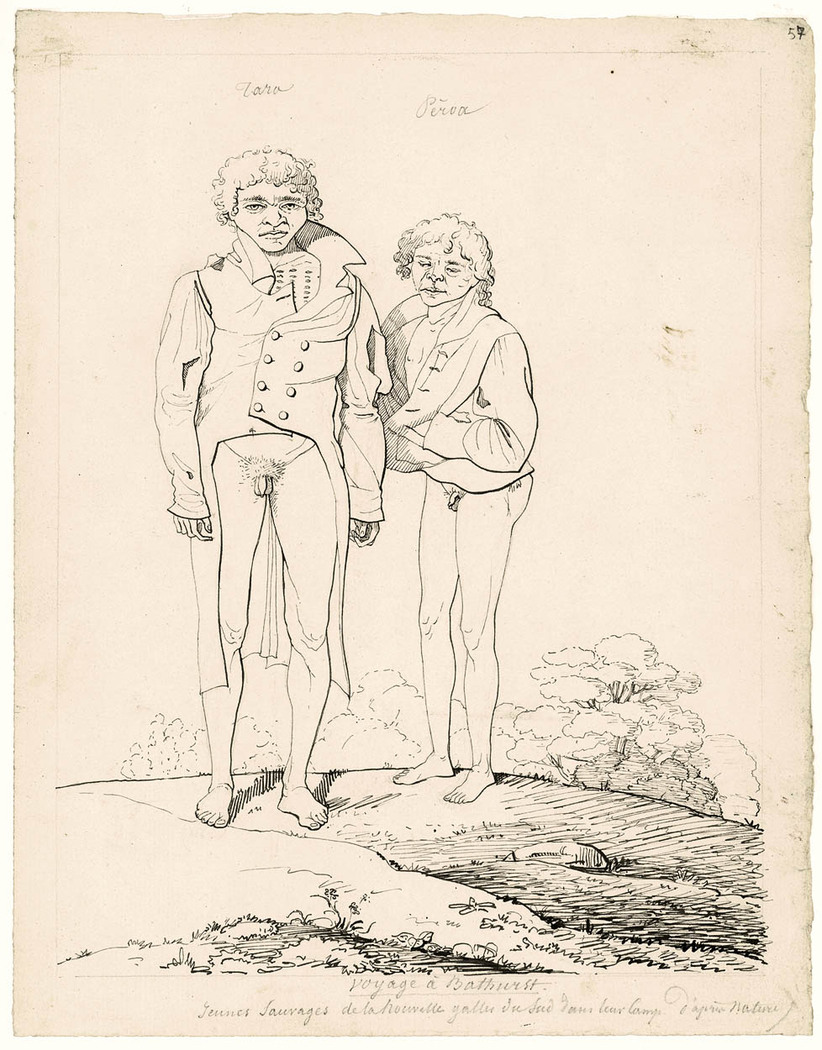 Drawings and etchings of Nepean and Springwood Aboriginal men by and after Alphonse Pellion, 1819c. 1819

Alphonse Pellion was a mid-shipman on board the French vessel L'Uraine, commanded by Louis de Freycinet, during its round the world trip between 1817 and 1820. The expedition, essentially a scientific one with a significant compliment of naturalists and artists, concentrated on the Pacific region. The expedition was particularly interested in recording ethnographic information about the indigenous people it encountered.
The expedition visited Sydney in November and December of 1819. During that time Pellion made a number of trips in NSW, including a visit across the Blue Mountains to Bathurst in late November, early December 1819.
Many of Pellion's drawings were published in the 'Atlas Historique' volume of the 1825 official account of the voyage. This volume, 'Voyage autour du monde : fait par ordre du roi sur les corvettes de S.M. l'Uranie et la Physicienne, pendant les annes 1817, 1818, 1819 et 1820 : Atlas historique, Paris, 1825', was arranged by fellow expedition artist Jacques Arago.

This small collection records some Dharug men Pellion met in the Nepean district, who probably lived around Regentville where he stayed on the way to Bathurst, and two men from the Springwood district, also encountered on this trip.
A translation of Pellion's account of his excursion to Bathurst can be found in Olive and W.L. Harvard, 'Some Early French visitors to the Blue Mountains and Bathurst' in the Journal of the Royal Australian Historical Society, vol. XXIV, 1938 p.245-260.
The drawings in this collection could be studio drawings, made as preparatory works for the published plates. It is unclear whether Pellion actually made them on the spot in NSW, or whether they were worked up later, in the studio, from his field sketches.