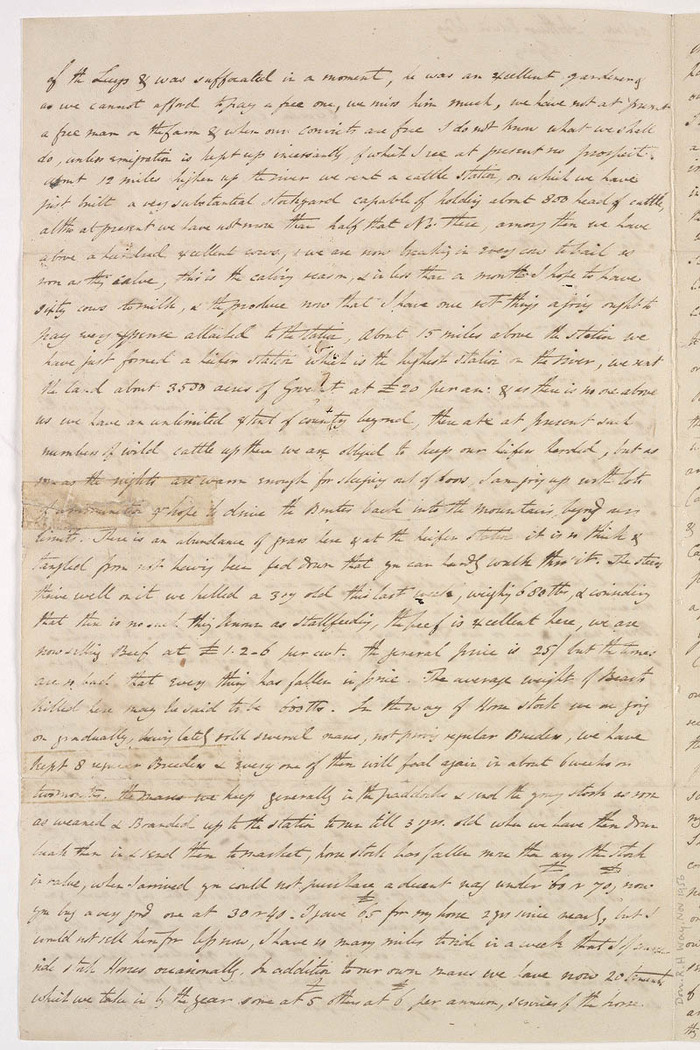 by Benjamin Way
Transcript:
of the lungs and suffocated in a moment, he was an excellent gardener & as we cannot afford to a free one, we will miss him much, we have not at present a free man on the farm & when our convicts are free I do not know what we shall do unless emigration is kept up incessantly, of which I see at present no prospect. About 12 miles higher up the river we rent a cattle station, on which we have just built a very substantial stockyard capable of holding about 800 head of cattle, although. at present we have not more than half that no. there, among them we have above a hundred excellent cows, we are now breaking in every cow to bail as soon as they calve, this is the calving season, & in less than a month I hope to have sixty cows to milk, & the produce now that I have once [set/got] things [agoing] ought to pay every expense attached to the station, about 15 miles above the station we have just formed a heifer station which is the highest station on the river, we rent the land about 35000 acres from the Government at £20 per an: & as there is no one above us we have an unlimited extent of country beyond, there are at present such numbers of wild cattle up there we are obliged to keep our heifers herded, but a soon as the nights are warm enough for sleeping out of doors, I am going up with lots of ammunition & hope to drive the brutes back onto the mountains lying [ ] limits. There is an abundance of grass here & at the heifer station it is so thick & tangled from not having been fed down that you can hardly walk thru it. The steers thrive well on it we killed a 3yr old this last week weighing 680lbs, & considering that there is no such thing known as stall feeding, the beef is excellent here, we are now selling beef at £1.26 per cwt. The general price is 25/ but the times are so bad that every thing has fallen in price. The average weight of beasts killed here maybe said to be 600lbs. In the way of horse stock we are going on gradually, being lately sold several mares, not [proving] regular breeders, we have kept 8 [regular] breeders & every one of them will foal again in about 6 weeks or two months. The mares we keep generally in paddocks & send the grazing stock as soon as they are weaned & branded up to the station to run till 3 yrs old when we have them down to break them in and send them to market, horse stock has fallen more than any other stock in value, when I arrived you could not purchase a decent nag under 60 or 70, now you buy a very good one at 30 or 40. I gave 65 for my horse two years since nearly, but I would not sell her for less now, I have so many miles to ride in a week that I [of course] ride stock horses occasionally. In addition to our own mares we have now 20 [ ] which we take in by the year some at £5 others at £6 per annum, services of the horse
Call Number:
Aw 120
Published date:
11 & 24 September 1842