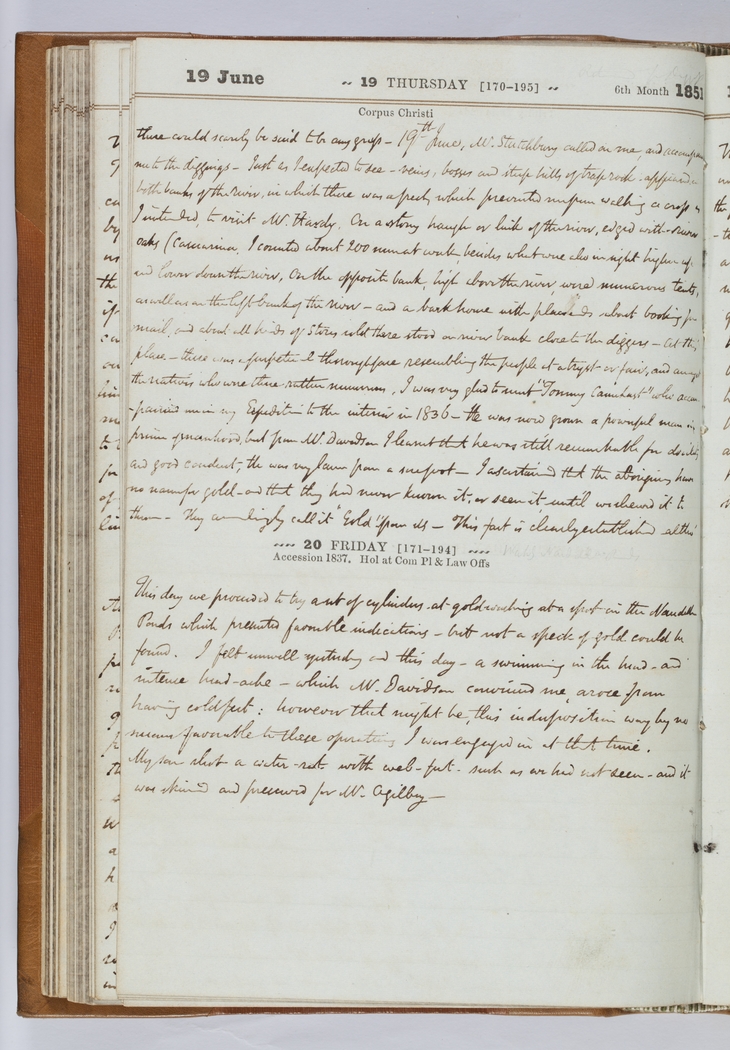 Sir Thomas Mitchell diary, with comments on the discovery of gold, especially in the Bathurst district p.51851

there could scarcely be said to be any grass. Thursday, 19th June, Mr. Stutchbury called on me and accompanied me to the diggings – Just as I expected to see – veins, bosses and steep hills of trap rock appeared in both banks of the river, in which there was a fresh which prevented me from walking a cross as I intended to visit Mr. Hardy.  On a stony bough or link of the river, edged with river oaks (Casuarina), I counted about 200 men at work, besides what were also in sight higher up and lower down the river, on the opposite bank, high above the river were numerous tents, as well as on the left bank of the river – and a bark home with placards about booking for mail, and about all kinds of stores sold there stood on river bank close to the diggers.  At this place there was a perpetual thoroughfare resembling the people at a tryst or fair, and amongst the natives who were there rather numerous.  I was very glad to meet “Tommy Came Last” who accompanied me in my Expedition to the interior in 1836.  He was now grown a powerful man in prime of manhood, but from Mr. Davidson I learnt that he was still remarkable for docility and good conduct.  He was very lame from a sore foot.  I ascertained that the aborigines have no name for gold – and that they had never known it, or seen it, until we shewed it to them.  They accordingly call it “Gold” from us.  This fact is clearly established altho’.

Friday, 20th June 1851
This day we proceeded to try a set of cylinders at gold working at a spot in the Nandillion Ponds which presented favourable indicating – but not a speck of gold could be found.  I felt unwell yesterday and this day – a swimming in the head and intense head-ache – which Mr. Davidson convinced me, arose from having cold feet:  however that might be, this indisposition was by no means favourable to these operations I was engaged in at that time.  My son shot a water-rat with web-feet such as we had not seen – and it was skinned and preserved for Mr. Agilby.