The Library’s portrait of Sophia O’Brien, painted by Maurice Felton in 1841, was featured in the winter 2016 issue of SL magazine. Since then, Sophia’s great-great-niece, Mrs Priestley, has supported extensive conservation treatment of the work.

The portrait was described by conservators in 1975, when it was acquired by the Library, as ‘very fragile indeed’ with a ‘very large flap in the middle of the picture’, ‘several other penetrations’ and ‘extremely dirty in all possible ways’. Conservation work in the 1970s and 80s has covered up some of the earlier damage, but we can see its extent in an X-ray.

In the 1970s, conservators mounted the painting on lightweight muslin with a wax lining to stop the tears worsening. They filled the holes with more wax, cleaned the surface and retouched areas where paint was missing. But the new fabric lining proved inadequate to support the canvas securely, and old cracks became ‘tented’ as the canvas contracted. 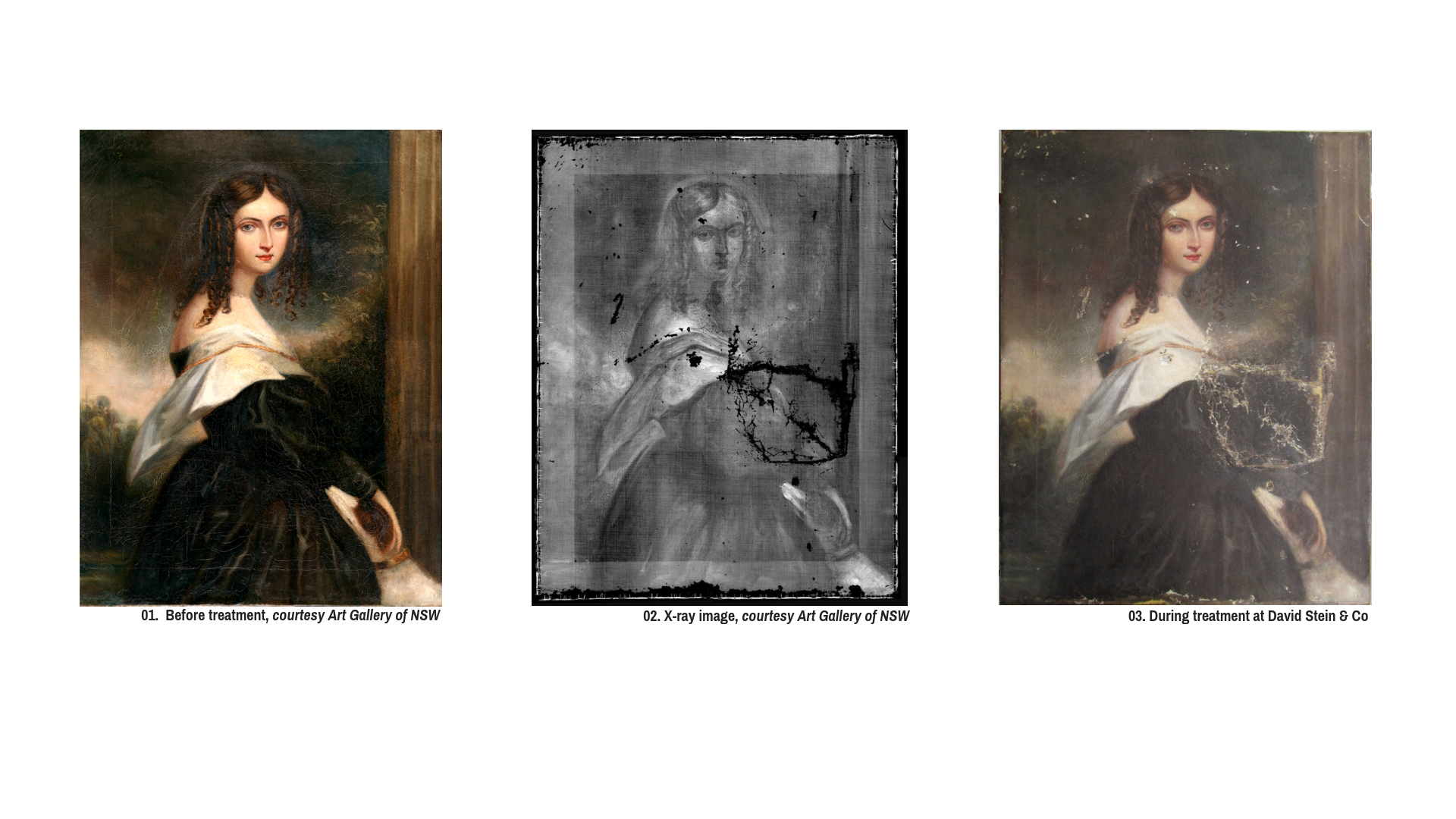 Later, to provide extra stability, a loose lining of linen canvas was suspended across the back of the painting — but this didn’t fix the misshapen surface. Over the years, the wax fills became lumpy and the retouching discoloured; the tented cracks lost paint along the peaks, creating a web of white lines that further disrupted the painting.

Despite the damage and deterioration in the materials used to immortalise Sophia, her youthful beauty and arresting gaze still capture our attention.

Mrs Priestley’s father had spoken of a painting in his grandfather’s childhood home of a beautiful woman called ‘Aunt Sophie’ who died young. But it was not just the story of her own ancestor that motivated Mrs Priestley to sponsor the painting’s conservation. She sees the painting as a testament to the many women who struggled in the harsh environment of the colonies.

The old lining and many of the wax fills were removed, and the canvas was relined — a practice not commonly used in modern conservation, but a necessary step to preserve this damaged canvas that had already been lined. The areas where paint had been lost were refilled, and this was followed by precise and time-consuming retouching. Lastly, the painting was revarnished. Now we have a much more stable painting, which is visually more integrated and more closely resembles how it would have appeared in 1841.

The painting did not come to the Library in its original frame, and Mrs Priestley was keen to see Sophia framed as she would have been in the family home. We know that Maurice Felton’s paintings were often placed in frames made by his brother-in-law Solomon Lewis or by Cetta & Hughes, both with businesses on George Street, Sydney.

A Felton painting in the Library’s collection, Thomas Chapman and Master Robert Cooper Tertius, believed to be in its original frame, was selected as the model for a reproduction frame. Master frame maker David Butler was commissioned to make the new frame.

The painting has been given new life in the twenty-first century, thanks to Mrs Priestley’s generous support. It will be on display in the Library’s new paintings galleries from October 2018.