The gold rush was a time of opportunism when people came from far and wide to stake their claim. Upon arrival the dreams of riches would give way to the reality of the harsh conditions on the goldfields and the necessity of housing.

In the beginning, many miners erected tents or open bark-shelters - a fast, cheap and portable way to live. Some merchants even made a livelihood from selling tents on the fields.

Those who stayed longer and brought their families along sometimes built their own homes made from materials found in the local area. The most common of these was the wattle and daub house - a method of building dating back to Anglo Saxon times. 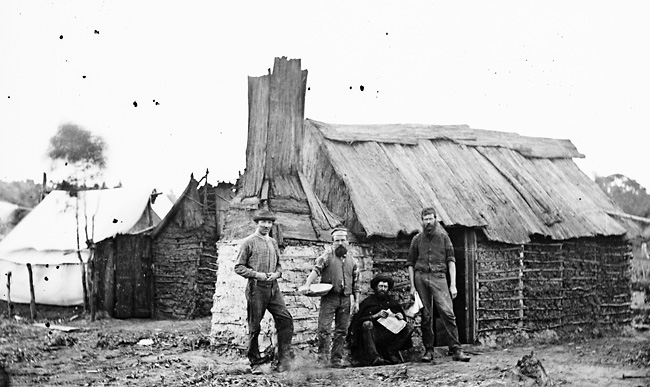 American adventurer Gus Peirce arrived in Hill End in 1871. He described the process of wattle-and-daub construction in his book Knocking About – Being Some Adventures of Augustus Baker Peirce in Australia.

"However, as I had been earning some twelve or fifteen pounds daily in surveying and draughting the various mining claims about me, I decided to remain. I built a three-room wattle-and-daub house and sent for my family.

This house was constructed in regulation style, without sills, by simply driving saplings into the ground at regular intervals, on either side of which were fastened the wattles or split limbs, forming horizontal half-rounds, the space between them being filled in solid with a mixture of earth, water, and grass. The roof was made of saplings and gum bark, and a chimney erected of slabs and finished with a barrel. A trench was then dug around the hut to drain off the water, and the new residence was complete. For interior decoration I used such portions of the Artemus Ward panorama* as had not been water-soaked; Brigham Young** and his numerous progeny gazed down from the bedroom ceiling, keeping watch like guardian angels; and different views of Salt Lake around the walls enlarged the perspectives of the different rooms.

When everything was ready Mrs. Peirce and the children came up from Sydney, and we settled down to domestic life in a dwelling which thousands of cockatoos never allowed to become lonesome."

After eight months, Peirce moved on, selling his house to the local blacksmith.

It has been suggested that the Australian Acacia tree was dubbed Wattle as it provided ideal branches for forming the wattles in this method of housing.