As well as the wet plate negatives taken by the American and Australasian Photographic Co, the Library has many original cartes-de-visite prints that were made from them in 1872-3. Most have the company’s stamp and number on the back and are quickly identified.

However, one carte taken in Hill End had a blank back. It was clearly taken at the same place and time as Holtermann negative 18830, but seemed mediocre in comparison. When it was donated in 1958, librarians noted the similarity, but also realised there was no corresponding negative.

The carte depicted a horse-drawn dray bogged in Clarke Street and the appalling condition of the street in the winter of 1872 which led to the incident described in Harry Hodge’s seminal work on Hill End, The Hill End Story – Book 1 p59, together with an image from Holtermann negative 18848.

“The road directly in front of it [William Meare’s Criterion Store] covered an alluvial test hole sunk by some earlier prospector and this hole subsided in the wet winter of 1872 to form the bog shown below.” 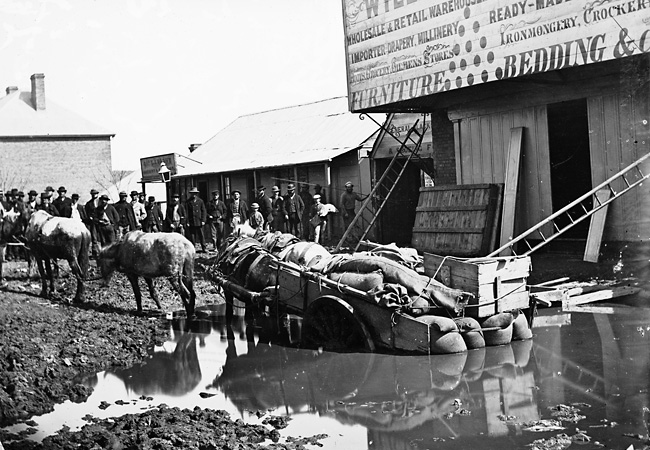 A more accurate date and authorship of the mystery carte can be deduced from an article in the Sydney Morning Herald 12 September 1872.

“Clark-street, as I have before stated, is muddy; the houses on each side are packed close, therefore the centre of the street which has a gentle slope to the hill is made the drain. A chain of muddy lagoons extend from end to end and the pedestrian often feels sorely puzzled to find a crossing-place at any part of it. At night time it is peculiarly perplexing, and taking a view from the balcony of one of the hotels, the spectator would imagine so many “will of the wisps” were flitting throughout the streets as the inhabitants with lanterns trudge through from point to point. A new arrival is apt for the first day or so to respect the polish of his boots, and take a few circuits to reach particular points, but the feeling soon wears off, and in a short time he takes the puddles as a matter of course, never heeding the appearance of his extremities.

One can find interesting studies even in mud; the photographic artists have; and I was favoured by two cartes by the local artists, the A. A. Company and Mr Pike, giving two scenes in Clark-street; they are studies in their way. One represents a horse being pulled out of a mud-hole, the other a dray bogged. These little episodes occurred a few days before my arrival; but they fade in comparison with one I saw last Sunday. A drunken man had by some means floundered into one of the favourite spots, fell, and was completely covered in the puddle. The spectators of course, had to pull him out –not an easy matter. After three ineffectual attempts with a long slab, at length the unfortunate one was rescued from his muddy position, and presented the appearance of a model enveloped by a clayey mould for casting purposes. The model was removed to the lock-up, stripped and a blanket supplied him by some obliging constable. Sights like this, I was informed, are frequent. The wonder is how poor foolish inebriates escape being smothered, for many drunken ones can be seen staggering about the street at nightfall.” 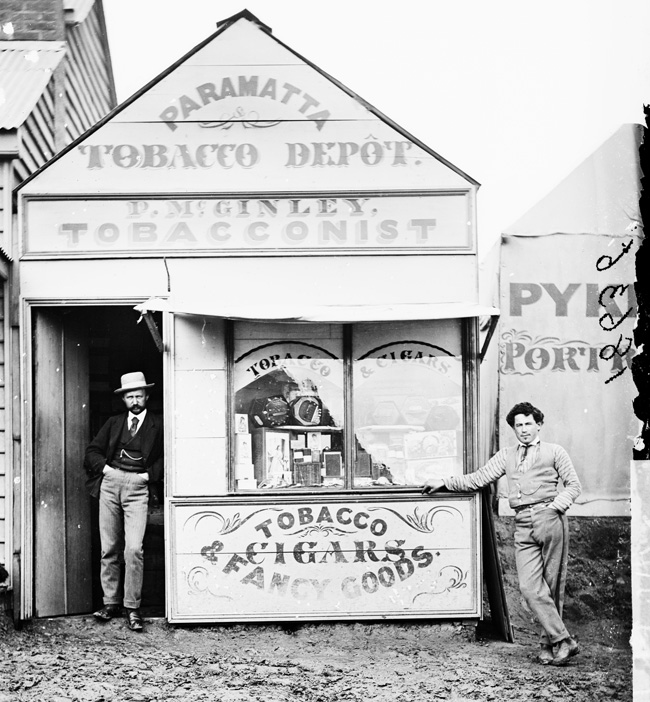 is clearly Alexander Pyke of photographers Pyke and Moss. The edge of the tent studio of Pyke and Moss, which stood between two tobacconists on the eastern side of Clarke Street, can be seen in Holtermann neg 18636 (left).

In fact, examples of Pyke and Moss’s cartes are visible in frames nailed to the verandah post and front of L H Hart’s store in neg 18736 (below).

Research and words by Alan Davies.