“Sir - Could you tell me how it is that people in Gulgong seem so fond of taking their poodles and mongrels to places of worship? I think that they do it without a thought of impropriety; but I can assure them it is becoming a nuisance, and I therefore hope they will take notice of and not offence of this letter, and leave their flamin' dogs at home.” 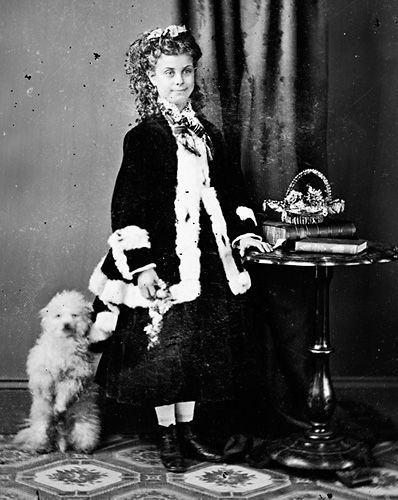 Study of the street scenes of Gulgong and Hill End in Holtermann's negatives reveals an unexpected abundance of the domestic dog.

The creatures can be seen accompanying the diggers at the mines, milling about outside hotels or sitting faithfully beside their masters at home. Occasionally, if well loved they were even taken along for professional portrait photographs as is the case with Miss Adelaide Montgomery and her small white friend (see left).

The dogs captured in these 1870s photographs range in breed considerably from large greyhound-like animals, probably employed as security guards to the often flimsily built homes, to small toy-breed companions. Many of these dogs were likely mutts due to the lack of fencing to segregate the different breeds.

An article entitled Fight for Supremacy from the Gulgong Guardian, June 5th 1872* reveals that the co-existence of man and his best friend was far from ideal as well as documenting a most unusual showdown.

“Gulgong since its beginning has been cursed with many nuisances, and one of those without a doubt is the proliferation of dogs and goats that abound unchecked all over this goldfield. Their presence is increasing at an alarming rate and something of a drastic nature needs to be done to thin their numbers...

The dogs, or should we correctly say mongrels, hunt in packs of twenty or thirty and scavenge for discarded morsels around the butcher shops. If one of them is lucky and secures a serving of rotting offal, a terrific fight erupts with savagery to scare a Trojan. Flaring of teeth and dripping of spit they tear into each other in an unabated all in brawl, shying horses, disrupting the traffic and scattering pedestrians for safer ground... The goats are a pest of another kind, roaming the streets and demanding right of way. They eat everything in sight that’s within reach and chewable...

The goats and dogs have never been on the best of terms which results in several skirmishes every day; but the goats with strength in numbers manage to keep their assailants in their place. However last Saturday there was change in the air; the early morning light was greeted with the usual barking and yelping of mongrel’s and cur’s. The goats had moved out of their camping place and were making their way down Herbert Street for their daily tour of the Black Lead. As they approached Cooney’s Hotel at the corner of Bayly Street a pack of hounds of all shapes and sizes launched a surprise attack that took the ‘nannies and billies’ by complete surprise. The fierceness of the brawl that ensued awoke the inhabitants for a block in each direction and small crowds assembled to watch the result of the fracas at a respectable distance. The fight raged for a good ten minutes before the goats made a break for it; accepting they were out numbered and were suffering badly from the surprise onslaught. Both sides took casualties as the limping and open wounds depicted. The dogs dispersed with an air of victory and the goats holidayed at the Black Lead for the rest of the weekend.”